7 secrets that forests have been keeping from you

Where would you find the world’s largest recreation center and the most natural supermarket? Forests wouldn’t have been your first answer, would it?

That’s the thing about forests. They keep secrets.

For too long we have seen trees as purely functional or ornamental, objects in the backdrop or on the sideline. They decorate city streets. They give us shady spots for resting and relief from the sun. They provide us with paper and fuel, fruit and nuts. These benefits are fairly obvious.

However, some of their other benefits are almost invisible to the naked eye. Forests are quietly working in the background, secretly cleaning our water, filtering our air and protecting us from climate change. They are guardian angels for more than a billion people, providing food, medicine and fuel to those who might not have access to these resources from anywhere else. They house more than three-quarters of the world’s terrestrial biodiversity and are homes to many of the world’s poorest people.

Forests play a key role in our lives that we don’t even recognize. Here are 7 ways how and some of their best kept secrets:

1. Supermarkets – More than the occasional apple or orange that we pluck from a tree, forests are veritable food markets. Almost 50 percent of the fruit we eat comes from trees, not to mention the nuts and spices that we also get from these food baskets.

2. Life insurance – Some communities rely almost exclusively on forests for their food sources. Around 40 percent of the extreme rural poor – around 250 million people – live in forest and savannah areas. For these communities, vibrant forests and trees are their lifeline and insurance against hunger. Forests act as supermarkets and water fountains. They provide almost 50% of the fruit that we eat and a large part the drinking water for some of the world’s largest cities.

3. Water Fountain- Forests provide a large part of the drinking water for over 1/3 of the world’s largest cities including New York and Mumbai. Many rivers and streams have their sources in forests. Trees act as filters and provide us with the clean water that is vital for life.

4. Energy – Around one-third of the world’s population use wood as their source of energy for necessities such as cooking, boiling water and heating. Wood from forests supply about 40 percent of global renewable energy – as much as solar, hydroelectric and wind power combined. Trees grow back, but we need to place more emphasis on using these resources sustainably to protect our forests from degradation.

5. Superhero- Forests and trees may look inconspicuous like Clark Kent, but they are like Superman in many ways. They are our heroes in the fight against climate change. They make our cities more sustainable by naturally cooling the air and removing pollutants. They safeguard our health by giving us places to retreat to and relax in. They tackle land degradation and stand up against biodiversity loss by providing plant and animal life with habitats.

6. Carbon sinks – As a force for good, our forest superheroes act as carbon sinks, absorbing the equivalent of roughly 2 billion tonnes of carbon dioxide each year. Like any superhero though, they have a flaw. Deforestation is their kryptonite. When trees are cut down, they release this carbon dioxide back into the air. Deforestation is, in fact, the second-leading cause of climate change after burning fossil fuels. It accounts for nearly 20 percent of all greenhouse gas emissions — more than the world’s entire transport sector. 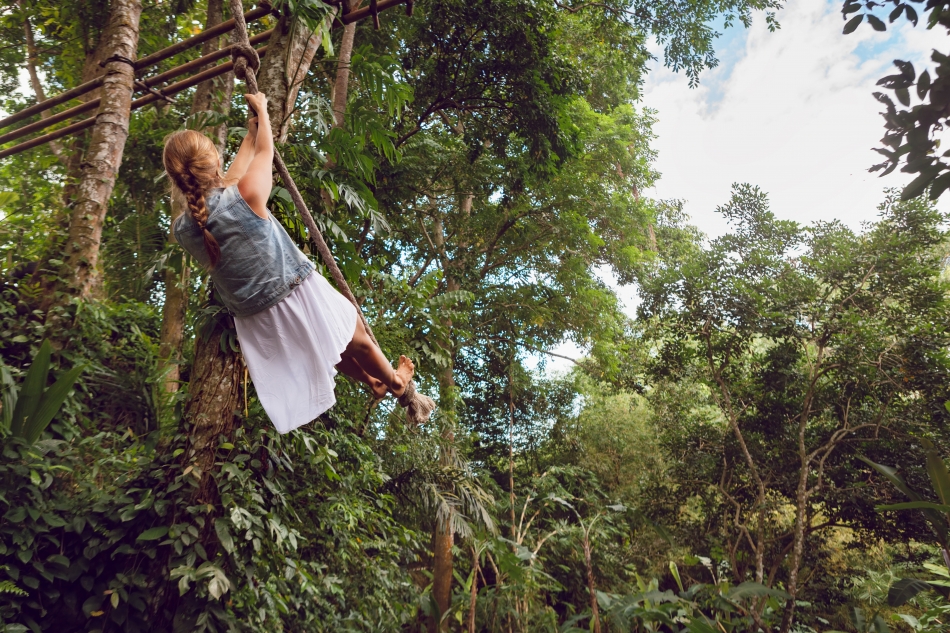 Studies show that green spaces and tree cover in cities can reduce levels of obesity and crime. The obesity rate of children living in areas with good access to green spaces is lower than in those who have limited or no access. ©Tropical studio/shutterstock.com

7. Recreation – Trees are stress relievers. Nature-based tourism is growing three times faster than the tourism industry as a whole and now accounts for approximately 20 percent of the global market. Studies even link green spaces and tree cover in cities to reduced levels of obesity and crime. As one example, the obesity rate of children living in areas with good access to green spaces is lower than in those who have limited or no access at all.

Forests have been our quiet helpers. They have been secretly playing a bigger role in our day-to-day lives than we realize. We cannot lead the healthy, productive lives that we would otherwise without them and we cannot hope to have a #ZeroHunger world without enlisting their help, the help of the governments, agencies and bodies that protect them and your help in respecting them.

Share these messages with friends and think about the part they play in your life. Forests and trees should get some recognition too. It is time to spill their secrets.

This website uses cookies to improve your experience while you navigate through the website. Out of these cookies, the cookies that are categorized as necessary are stored on your browser as they are essential for the working of basic functionalities of the website. We also use third-party cookies that help us analyze and understand how you use this website. These cookies will be stored in your browser only with your consent. You also have the option to opt-out of these cookies. But opting out of some of these cookies may have an effect on your browsing experience.
Necessary Always Enabled
Necessary cookies are absolutely essential for the website to function properly. This category only includes cookies that ensures basic functionalities and security features of the website. These cookies do not store any personal information.
Non-necessary
Any cookies that may not be particularly necessary for the website to function and is used specifically to collect user personal data via analytics, ads, other embedded contents are termed as non-necessary cookies. It is mandatory to procure user consent prior to running these cookies on your website.
SAVE & ACCEPT