Are insect feeds the future of the animal feed industry?

An increase in wealth, urbanization and global population growth, more so in Africa and Asia, has created changes in the global consumption patterns, lifestyle and food preferences. This has led to an increase in animal protein demand.

There is a high demand for livestock feeds and the limited resources are feeling the pressure to meet it. The Food and Agriculture Organization of the United Nations (FAO) estimates that food production will have to increase by 70% to feed the world in 2050, with meat outputs (beef, fish and poultry) expected to double. How then do we meet this demand, especially with the key challenge being protein shortages?

During an interview with Kristian Larsen, Co-Founder and CEO of NutriEnto, he highlights how NutriEnto is providing sustainable feed solutions within the animal feed sector as well as promoting waste management.

“There are two sides to NutriEnto, we commercialize in the production of insects as animal feed and challenge the way people see waste in the market. We collect 10 tonnes of waste that usually end up in landfills and convert it into more valuable resources,” says Kristian.

The collected waste is then fed to the colony of insects, which break it down in a process called bio conversion. Through this process, they create a nutrient rich fertilizer which they sell to farmers. The insects also generate and create a protein rich substitute which they use as animal feeds. 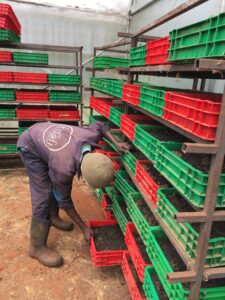 To address this, NutriEnto focuses on creating a sustainable and reliable source of protein for the animal feeds sector. They do this by ensuring their primary target audience, the poultry and aquaculture sector, receive affordable and high quality products. To add on this, NutriEnto is also looking into teaching them how to create their own insect meals to cater for the demand of protein  through insect feeds.

The organisation has also set up an agribusiness programme, Agro Programme, where they offer farmers starter packs and training depending on the level of training they require. 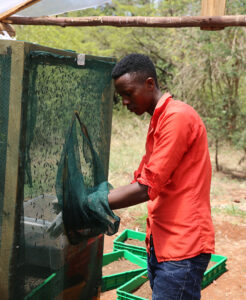 “Under the Agro Programme, we have a starter pack and training program which depends on the level of training that the farmers require. For instance, a customer might approach us to train her for a month till we get a full cycle of the insects, while another client might only want us to help them increase their egg-laying process or the harvesting process,”says Kristian.

Aside from insect feeds catering to the demand of the animal feed sector, Kristian also believes that it holds a potential within the food industry and also caters for human consumption.

“In many cultures, insects are a staple diet and human consumption as well as animal feed. So I do not see why there should be any setbacks in converting people on a grander scale. I think there is a big movement happening in many lobbyists in Europe as well. We are trying to get insect production both for animal and human consumption regulated and licensed for sale around Europe. So I cannot see why it should not be the norm in some years to come,” he says.

Through their partnership with Kenya Climate Innovation Centre, NutriEnto has been able to receive mentorship programmes as well as training that have helped them focus on their internal systems as well as enact changes on their supply chain systems.

This website uses cookies to improve your experience while you navigate through the website. Out of these cookies, the cookies that are categorized as necessary are stored on your browser as they are essential for the working of basic functionalities of the website. We also use third-party cookies that help us analyze and understand how you use this website. These cookies will be stored in your browser only with your consent. You also have the option to opt-out of these cookies. But opting out of some of these cookies may have an effect on your browsing experience.
Necessary Always Enabled
Necessary cookies are absolutely essential for the website to function properly. This category only includes cookies that ensures basic functionalities and security features of the website. These cookies do not store any personal information.
Non-necessary
Any cookies that may not be particularly necessary for the website to function and is used specifically to collect user personal data via analytics, ads, other embedded contents are termed as non-necessary cookies. It is mandatory to procure user consent prior to running these cookies on your website.
SAVE & ACCEPT